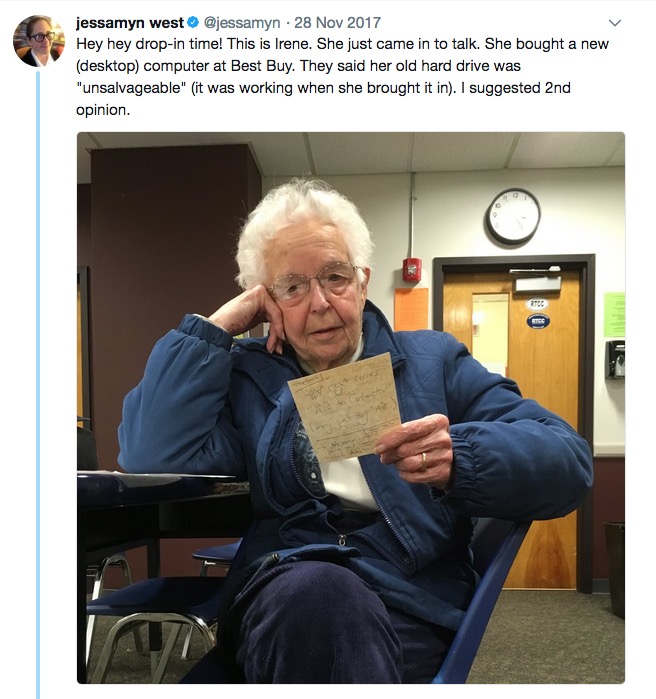 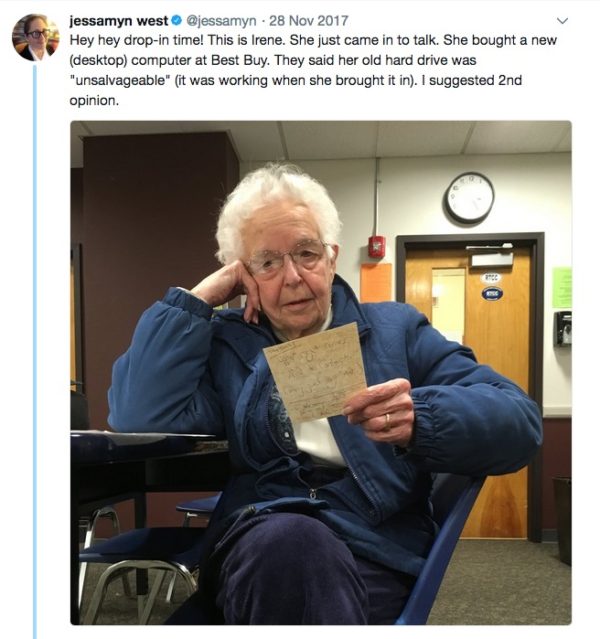 Excerpt from an email from a librarian in the Midwest: One of the goals for the new [library] strategic plan is that “Patrons will find support and expertise in technology instruction.” I’ve never taught classes before but I do like to mess around with technology.

I don’t know if it is my perception or not, but your drop-ins seem like a great community building atmosphere where disparate characters can come together and learn about tech and get help. I’d love to know how you have designed/fostered their growth.

I do drop-in time work within the context of a technical high school not the public library, just as an FYI. I started there ten years ago after my last library job had ended (it was grant funded) and I was like “I am taking some time off and will not take a job unless I open the paper and there is a ‘teach email to old people’ job listed…” and well, there was! The vocational school was hiring a VISTA volunteer to help with community tech work. Basically it’s a regional school so all the “sending towns” send kids and money to the school but don’t get as much back as the town that houses the school. So we thought about how to fix that. END_OF_DOCUMENT_TOKEN_TO_BE_REPLACED 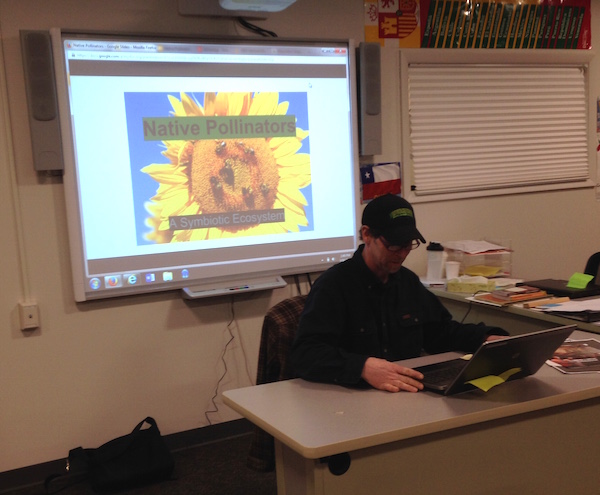 So since I left MetaFilter almost a year ago, my goal was to spend more time “librarianing” I have a part time job with the Internet Archive running Open Library. I write for The Message a Medium publication, sometimes about librarianship and sometimes not. I write monthly for Computers in Libraries. I do my local technology instruction through the Adult Education program at the local vocational high school. In the past I’ve also done a lot of “How I do it” talks on the road at library conferences. I have not been doing that this month. Instead, I’ve been picking up more local tech instruction work, some paid and some unpaid. It’s been a fun busy week here and I thought I’d outline a few things I’ve done that people might be interested in.

I also finished a Computers in Libraries article today about data collection and was pleased to see one of my local colleague, Amber Billey a metadata librarian at UVM, get listed as one of Seven Days’ Seven Vermont Women to Watch. If there’s a meta-story to this post it’s that staying local and working on the digital divide in your own backyard has been, for me, as satisfying as being on the road. And a little more calm.

Hi. This is an update on my work situation. My boss at the high school where I work let me know that they will be discontinuing drop-in time [and the accompanying library support that went along with it] effective, well, now. I know a lot of people haven’t really understood what I did there in the first place, so let me spell it out, in past tense.

I worked super part-time [somewhere between 5-10 hours a week]. I staffed a drop-in lab two afternoons a week where people who needed extra computer assistance could come use a computer or just ask a question. I also did outreach to local libraries who had tech questions. Over the past three years, I worked with maybe nine tiny libraries; a few I worked with regularly. I also, as a separate job, taught evening adult ed technology classes. I may still do that.

Drop-in time was never super popular and on occasion it was empty. The last Summer we didn’t have a lot of attendance and so we were going to not do drop-in time this Summer. I was looking forward to some time off. Instead, the program got cut entirely. Funding is tight all over and even though my total salary there was less than 10K, it’s money that could be spent elsewhere. I’m sure there are some politics involved, but I’m lucky to not be involved with them. My (former) boss is a wonderful person. Her boss is stuck between a rock and a hard place, I suspect. His boss is the school district superintendent.

I’ve often said during my 2.0 talks that we count the wrong things in libraries. That we measure door count more than we look at website traffic. That we pay attention to phone reference more than IM reference. That we ignore certain aspects of outreach and preference “traditional” library services. I kept meticulous stats at this job. I did 105 service hours this semester. I helped 32 people, many of whom were adult ed students needing extra help. Some were high school teachers. Some were librarians. Most were active community members and I could watch their improved skillsets directly impacting the community — the garden club brochure, the choral group’s mailing list, the hospital chaplain’s holiday card list, the vocational training woman’s email address book — in positive ways. I helped older people be less isolated. I helped uncertain people feel more competent.

However, there’s no check box for “improved quality of life” on the reporting forms at the vocational high school. I’m of two minds about all of this. It feels weird to feel sort of fired. On the other hand, I know it’s not personal. I’ve also been ramping up my public speaking and spending more of my time and attention elsewhere and was, in fact, looking at cutting back hours so maybe this is a baby-bird-out-of-nest situation. I need to move on, maybe. This is not about the money, I’m set for money, incidentally. I have other jobs, they pay well.

I am welcome, I am pretty sure, to scare up grant money and continue to work there, they just can’t pay me and no one has enough free time to help me with that. I don’t want to just volunteer and I’m a little frustrated that at this point that’s the only way the program will continue. I do fill-in desk hours occasionally at the local library. One of the other local libraries would like to hire me to do ILL and automation work for them, but I’m waiting for a contract, something more than a “yeah we’d like that.” People still call me with questions and it feels really wrong to say “sorry I’m not on the clock anymore…” I like this small community and have felt useful here, much more than I did when I was a public librarian, much more than I did when I was in Seattle.

I’ve felt, without being too grandstandy here, that I’ve changed lives in exactly that way we say that librarians do that. I’d hate to think that I’m looking at a failure of marketing or “proving my value” but there’s always that nagging feeling when something like this happens. Now I have to find a way to keep “changng lives” that outside of what had become my normal routine. I talk about the digital divide a lot, and this is me and my program falling right into it. The chasm is deep and wide.