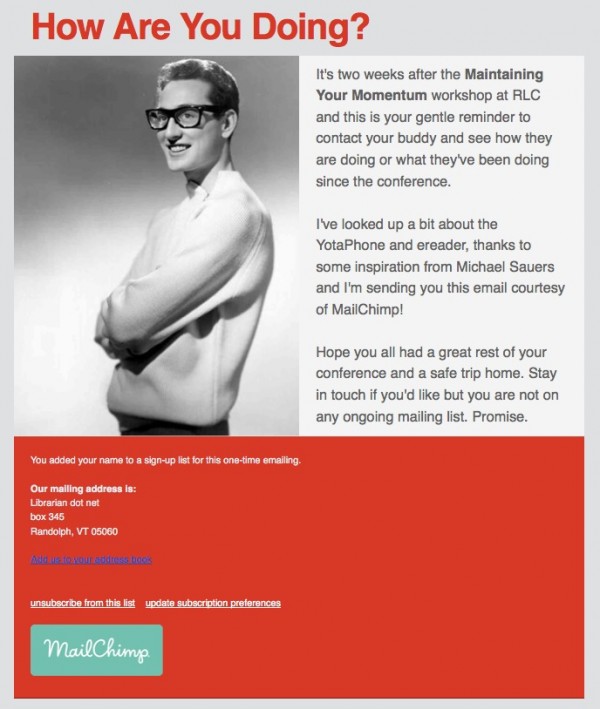 One of the other great things about the Rural Libraries Conference is that, in addition to giving a keynote presentation, I was also given a workshop slot to … basically do whatever I wanted. One of the things that I think is frequently missing from conference planning is some way to help people with follow-through on the ideas they get or the things they want to try or even keeping in touch with the people they meet. Conferences are often a lot of fast-paced learning and mingling and fun and weird food and odd schedules and then people come home and sleep it off and it all seems like a distant dream when they get back to work. I’m sure this is triply true if you’re at a conference someplace wacky like The Grand Hotel.

So I did a very short presentation called Maintaining Momentum and talked about some ways to keep the energy up. You can read the (very short) slide deck [pdf, link fixed!] to get an idea of what it was like. I did something I basically never do which was get people split up into pairs and give them a buddy to check in with in two weeks, with little handouts to swap email and ideas. We went around the room and talked about things we’d seen that we liked and might want to implement (in the library and just in life generally). I also got an email list of everyone’s contact info (note for future talks: tell people to print legibly) and learned to use MailChimp myself to send a one-time-only “Hey get in touch with your buddy” reminder which was part of what I’d vowed to learn.

It was a great presentation, people were really into it and seemed to enjoy having space for a bit of a meta-discussion about the conference while at the conference. I’m really happy I went outside my usual comfort zone to put it together, very appreciative of the great folks who showed up and gratified that people didn’t talk all the way through this one (except when they were supposed to). 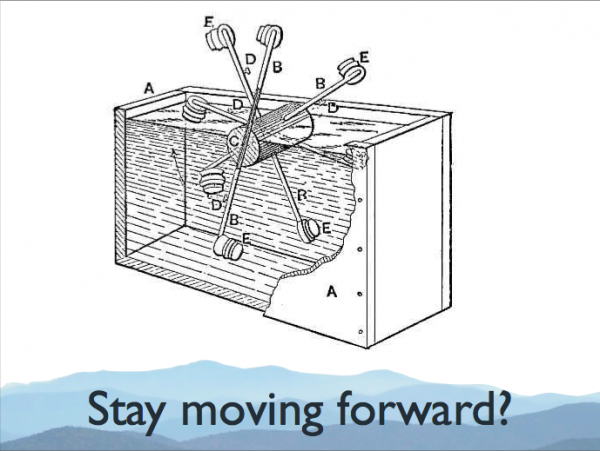 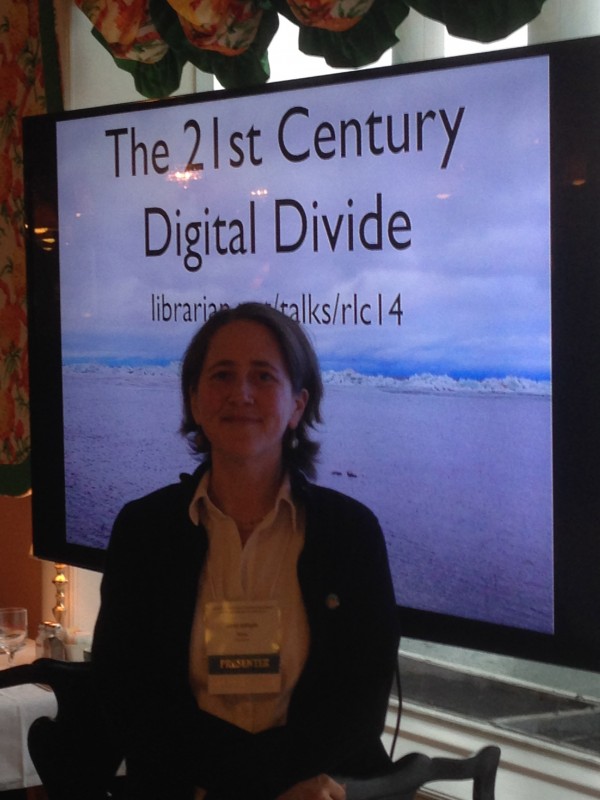 Hello faithful RSS readers and anyone else who is sort of curious what’s been going on. I’ve been feeling like I’ve been getting my brain back this Summer and I appreciate your patience with what has been a trying set of months. I did go one place, and that was to North Texas during a heat wave where I decided to (mostly) quit smoking and got to hang out with some neat local librarians and some fun folks who I already knew at the Library Tech Network TechNet 2011 Conference. I gave two talks which you may already have read, but in case you’re interested you can click through and check out Tiny Tech/High Tech and On the Fly Tech Support.

This month I’m heading to Cambridge for a DPLA meeting and then to Augusta Maine for a one-day meeting about Ebooks and Libraries which is sure to be interesting and informative. I’m giving a lunchtime talk but also leading a breakout session called “Ebooks are Great! Books are great!” talking about the differences between books and ebooks. Based on some of the feedback I’ve been getting on Twitter and elsewhere, that will be a lively topic.

Next month I’ll really be scooting around a bit and my drop-in time and evening Mac classes are starting up locally which will keep me busy and pretty happy. Anyone attending the NELA conference, the Michigan Library Association conference or the CLIR symposium in Milwaukee, please do say hello. In the meantime I’ll be updating somewhat more here and getting back to my own RSS reading so I hope to be less of a stranger.

I’m using the Library of Congress version of this photo of the reading room at the University of Michigan library (which has not made its way to Flickr yet) but I found this image via Shorpy. It’s a nice non-Flickr illustration of how having a way to have users comment on your content can increase everyone’s level of knowledge. The first comment has a link to this web site which contains another photo of the same room, highlighting the statue, and the story of what happened to it.