“Copyright for Librarians is a joint project of the Berkman Center for Internet & Society and Electronic Information for Libraries (eIFL), a consortium of libraries from 50 countries in Africa, Asia and Europe. The goal of the project is to provide librarians in developing and transitional countries information concerning copyright law.” Here’s the press release. 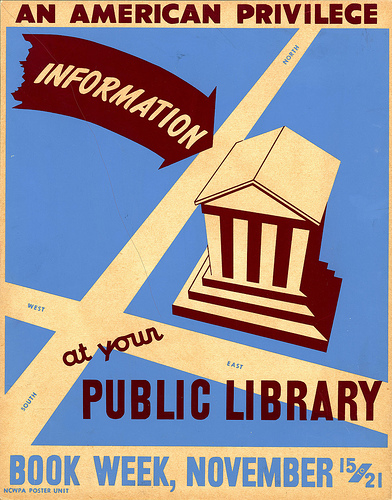 So, I have some free time this week since I am supposed to be at PLA. My slides and my notes and links are online: Library 2.0 and Reader’s Advisory. I read about what the other speakers had to say, it sounds like it was a really lively pre-conference.

I came back to a facebook full of pleas for library assistance including the Save Libraries umbrella group for all the assorted campaigns. Apparently this is a very bad time to be a library. I’ve been meaning to do a wrap-up of some of the save the library campaigns. My apologies that it’s taken me so long to do this.

If people want to add more in the comments, please do. Times are tough all over, but libraries are needed more n tough times, not less.

Library students Turner Masland, Rebecca Chernay, Amy Frazier and Serenity Ibsen have made a delightful video The Visiting Librarian’s Guide to Portland. Donut and coffee suggestions and a lively soundtrack. And remember: Couch Street is pronounced “cooch.” Aaron Schmidt has also written a Walking Guide to Portland that is useful and the PLA Blog has a list of Portland libraries in case you’re like me and like to visit local libraries while you’re out and about.

So, I may have mentioned earlier that this is the month I’m away giving talks and talking to librarians instead of typing on my blogonet. I’m partway done. I’ve been to Florida and Alaska and Austin Texas and I’ll be stopping by Portland Oregon next week and then I’m pretty much done. I’ve done a few talks you’ve maybe heard before but the biggest news is the panel that NYPL’s Jenny Engstrom and I did at SXSW on Tuesday. It was called How The Other Half Lives: Touring The Digital Divide [link goes to our slides] and it was a look at how libraries are dealing with people on the other side of the digital divide.

Some of this is stuff you’ve heard before but some is newish. We were lucky enough to give our presentation after the FCC released the results of their broadband study but before they actually released their Broadband Plan, so there was a lot to talk about but not too much to fight about. The talk was well-attended, well-tweeted and folks asked a lot of questions and stuck around to talk more. I’ve just gotten back from Texas so I’ll save more links and discussions for a little later. Thanks to everyone who showed up and who supported us in our desire to get this talk on the roaster at SXSW. I think we gave people a lot of food for thought.

Enjoying listening to Jenny Levine talking about gaming in libraries. I’m still not much of a gamer, but I’ve definitely been seeing the value of gaming programs bringing teens into libraries. She pointed me to a document that I hadn’t read and am really enjoying [kill me, I’m multiasking!] called Fiat Lux, Fiat LateÂ­bra: A CelÂ­eÂ­braÂ­tion of HisÂ­torÂ­iÂ­cal Library FuncÂ­tions [pdf] by D. W. KrumÂ­mel. Not a new article (Jenny posted about it in 2008) but a great read including, especially â€œThe Seven Ages of LibrarÂ­iÂ­anÂ­shipâ€ which is a great exposition of how the library has evolved and is evolving.