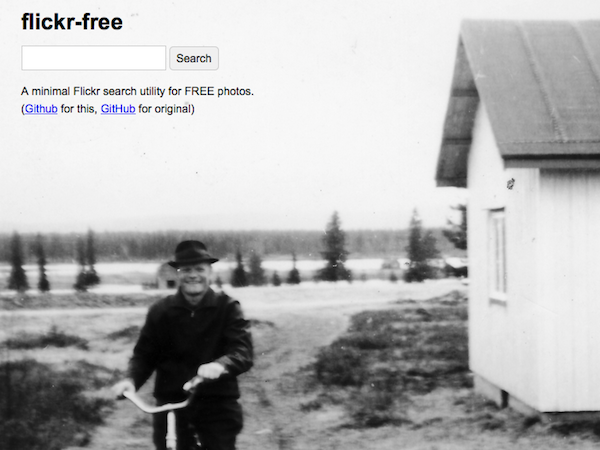 I made a thing. It started out with me just reading Twitter. A friend built a thing and tweeted about it.

Here’s a thing I made during an in-class demo today. https://t.co/e4EEfyp5vg

The thing was a super-simple search box which returned content on Flickr that was public domain or Creative Commons licensed. Very cool. However, when I use stuff on my talks, tools or otherwise, I like to make sure it’s free content. Creative Commons is great, I just was looking for something a little different. I noticed the code was on Github and thought “Hmmm, I might be able to do this…”

I’ve used Github a bit for smaller things, making little typo fixes to other people’s stuff. If you don’t know about it, it’s basically a free online front end to software called Git. At this site, people can share a single code base and do “version control” with it. This is a super short and handwavey explanation but basically if someone says “I made a thing, the code is on Github” you can go get that code and either suggest modifications to the original owner OR get a copy for yourself and turn it into something else.

In the past we’ve always said that Open Source was great because if you didn’t like something you could change it. However it’s only been recently that the tools to do this sort of thing have become graspable by the average non-coder. I am not a coder. I can write HTML and CSS and maybe peek inside some code and see what it’s doing, maybe, but I can’t build a thing from scratch. Not complaining, just setting the scene.

So, I “forked” this code (i.e. got my own copy) and opened it up to see if I could see where it was doing its thing and if I could change it to make it do something slightly different. Turns out that Flickr’s API (Advanced Programming Interface) basically sends a lot of variables back and forth using pretty simple number codes and it was mostly a case of figuring out the numbers and changing them. In this image, green is current code, red is older code.

The fact that the code was well-commented really helped. So then I changed the name, moved it over to space that I was hosting (and applied for my own API code) and I mess around with it every few days. And here’s the cool thing. You can also have this code, either Dan’s which searches free and CC images, or mine which only searches for free images. And you don’t have to mess with it if you don’t want. But if maybe you want to use the thing but make a few of your own modifications, it’s easier than ever to do it with something like Github. Please feel free to share.

If you’re always looking for more ways to get public domain and free images, you may like this older post I wrote. 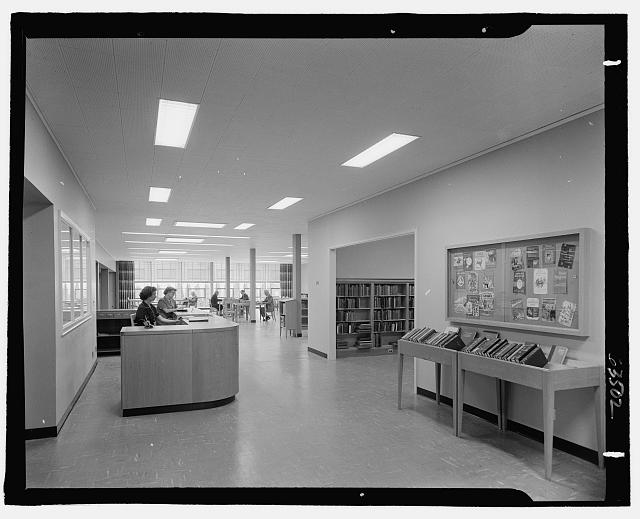 The Library of Congress has finished a report (full report and shorter summary in pdf) summing up what they’ve learned after the first nine months of their experimentation with Flickr. Here is an excerpt from the summary. Look at these numbers.

The following statistics attest to the popularity and impact of the pilot. As of October 23, 2008, there have been:

Between January and May 2008, the Library saw an increase in hits at its own Web site. For Bain images placed on Flickr, views/downloads rose approximately 60% for the period January-May 2008, compared to the same time period in 2007. Views/downloads of FSA/OWI image files placed on Flickr rose approximately 13%. Average monthly visits to all PPOC Web pages rose 20% over the five-month period of January-May 2008, compared to the same period in 2007. For additional information, see the Outcomes section in the full report.

Not only is that data good news about the project but being able to say “Hey when the Library of Congress opened up their photos to commenting and tagging, they only had to remove 25 inappropriate tags/comments out of 75K instances of user-generated content” thats a big deal. “The library structure was originally a hot dog stand operated by Harry Lewis. Lewis’s grandfather, W.R. Surles, owned the land and structure, which he provided for use as a library in the late 1930s.” [read more in the picture comments over at Flickr.]

Just got this in my inbox this morning and figured I’d share. I edited a little bit and added some hyperlinks, also suggested that BPL needs an announcement blog along the lines of the nifty one at NYPL Labs.

Thanks for blogging about our Flickr presence last week… your influence was greatly felt (to the tune of 2,500 hits on the day of your post, with virtually no other publicity at all).

I wanted to let you know about a couple of this week’s developments: