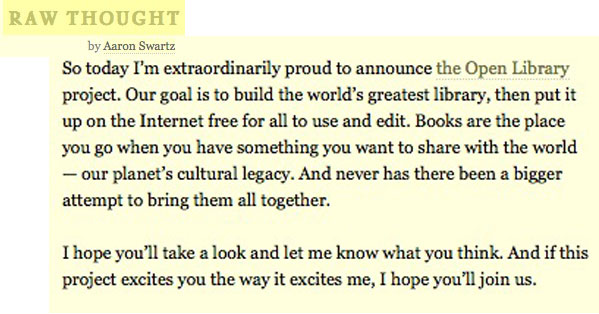 Aaron has a good post about giving good presentations. As always, stick around for the comments. I offered my advice. Even in the short thread, it’s interesting that people have such different ideas about what makes a good presentation. Should it be something that can be repackaged and replayed without the presenter at a later date? Should there be handouts? What’s the balance between charisma and raw data?

I gave two talks yesterday at the Hawaii Library Association Conference which were variants of other talks. HLA likes to keep the interest level up and so all the time slots were short. I gave one 45 minute talk and one that was an hour, both of which were seriously shortened from their original lengths. I felt like I really had to distill them down and this may have made them better. Here they are.

The second talk is quick becoming a favorite of mine since it’s a niche that’s not discussed too often at conferences and it’s full of practical information. I also sat on a Dead/Emerging technologies panel with Aaron, Wesley Fryer, Marshall Breeding and Victor Edmonds. It was a pretty meta panel — Aaron and Wes were both taking and posting pictures during the talk and I was responding to blog posts from someone in the audience who turned out to be Dr. Drew, a library professor at UH. He gave us a great recommendation for a good place to go to dinner, complete with bellydancer.

I’m on my way to coconut waffles. Check out the HLA06 tag on Flickr and Technorati for much much more.

It’s really great to see the Library Journal Movers and Shakers awards include so many colleagues not just from the blogging world — Aaron and Michael — but other parts of the library world I interact with when I step away from the keyboard, like Veronda Pitchford from Chicago and Kim Charlson from Perkins School for the Blind, a place I rememebr visiting when I was a little girl.