Interesting to look at the various ways libraries are reacting in policy fashion to the HarperCollins “You can have 26 checkouts at this price” decision. Library Journal has a recent round-up. 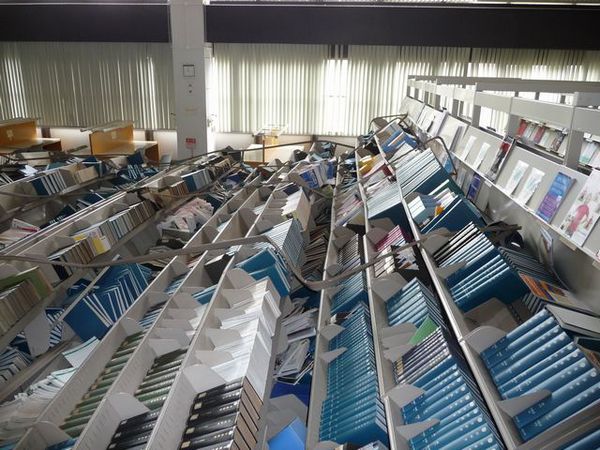 This list of information came to the VT Libraries list, via the IFLA list. I found one copy of it online in a sort of random place and it’s a few days old but it’s got a nice comprehensive-seeming outline of what’s going on in Japan and especially in the Japanese library community. IFLA has also made their own resource page which is full of pointers as well as comments from notable Japanese librarians. People who read Japanese will probably get a lot of information from the Savelibrary wiki which has up to date information and a lot of links. The photo comes from this thread (original thread in Japanese) where librarians were posting photos of their institutions just after the earthquake. If you continue to scroll, you’ll see some better photos now that recovery work has started. 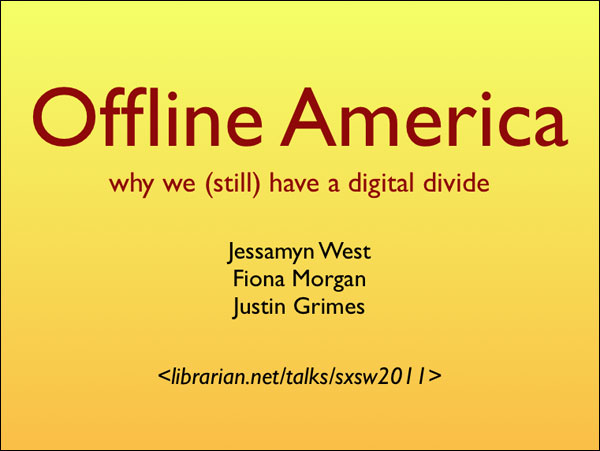 This year SXSW got the audio up from the panels very quickly. This panel isn’t mostly me, it’s mostly my two co-panelists Fiona Morgan and Justin Grimes talking about the other non-library issues surrounding how and why people can or can’t get access to broadband internet. If you’re interested in this sort of thing, you might like it. The panel went well, was well attended and started a lot of conversations that I think still need to be happening. I myself was without decent internet here at home for the past week since I got back from SXSW (I switched ISPs and had some in-between time where I “only” had access via my iphone and local wifi including, yes, the library) and it changed my life patterns more than I even thought it would. Interesting times.

Here are the slides (mine and Fiona’s and the text of my talk) and here is the panel page on the SXSW page which has the audio link after the blurb.

The future of the book, the printed book, is up in the air. People stand to make a lot of money if they can convince you that their version of the future of print and reading is correct. Many of us would just like to separate the wheat from the chaff and keep delivering good content to various sorts of readers, from now until forever. The Green Mountain Library Consortium released their statement about Harper Collins this week which, while not as strong as I personally would have liked, I think sends a “hey man, not cool” message and at least sends a “hey we’re paying attention” message which I think is the important part. In the meantime, there are a lot of people who have a fairly good understanding of the general ebook situation who are deciding to poke a bit of fun at the crazy world we’re currently inhabiting. John Scalzi has made an electronic publishing bingo card which, while amusing in and of itself, has a weath of great discussion in the comments.

I’ll note that I spent a good chunk of time over this past week going over my page proofs [again] and yet I have no idea at all what the ebook for my book will look like or even what format(s) it will be available in. I can’t wait for this in-between time to be over with.

SXSW 2011 was the year of the librarian and I was glad to be a part of it. I’m still slowly heading homeward but you might enjoy this short Atlantic article.