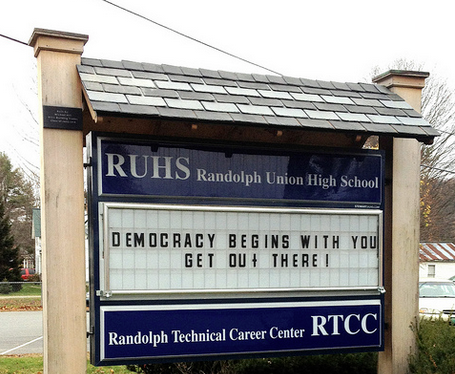 [another edited post from a mailing list discussing digitally divided citizens. Some people were reflecting that their elected officials don’t remember being offline. In Vermont we have a different issue]

In Vermont where, at least where I live, â€‹our elected officials are themselves digitally divided and so can’t always make good choices for the populations they serve. So issues like:

Are all determined by people who do not have much of an idea of the normative expectations in the space and who have to make decisions about those things. So to these three points…

Vermont recently changed their Open Meeting laws to tell towns with websites they needed to put notes from government meetings online within a few days of the meeting happening. Some towns opted to take down their website because they felt compliance would be too onerous. And all of these decisions happen at a town by town level.

People without a good understanding of the tech ecosystem are vulnerable to people who want to sell them things and can’t properly evaluate what they are being sold. I spend a lot of time just outlining what “normal” is to people and then getting a lot of aggravated “Well this way has always worked for us, kids today and all their electronic gadgets…!” pushback. So we do need to attack the problem of the digital divide from both (all) sides.

> I’d be very interested in helping to support (or start) a research project
> that more critically investigates the state of the digital divide in
> communities and see how that compares with the more recent digital divide
> stats we’ve been sharing.

I’ve maintained in the past that the gap is shifting but not really that much. The big deal seems to be that we want/need things that are quantifiable and we’re getting further into the mess of qualitative concerns with people and their internet access/usage. From a library perspective it’s looked like this….

– People don’t have expensive computers – we helped this with access to tech from the Gates Foundation and some maintenance/upkeep assistance from WebJunction/others
– People don’t have broadband – E-rate and consortium level pricing has closed this gap, nearly every public library in the US offers some form of broadband
– People don’t have real broadband – this is still an open issue but it’s being worked on. In rural VT where I live I’ve seen my maximum-possible internet speed increase gradually while the amount necessary to use the internet takes leaps. More libraries offer gigabit connections.

– People say mobile broadband = broadband – this is a culture thing (because people who sell you mobile want you to believe this) and more than anything this is not true for homework and should be aggressively pushed back againstâ€‹ while we still try to increase people’s mobile accessâ€‹
– People say a phone is a computer – again, mobile is GREAT but having a phone gives you a much smaller range of creative options than a computerâ€‹,â€‹
and people need to be clear about that (and not say we’re solving digital divide issues giving kids phones/tabletsâ€‹, we’re eklping but just shifting the goalpostsâ€‹)
– Peopleâ€‹ are afraid/stubborn/traditional – they â€‹have a level of timididy with technology (this is often â€‹oâ€‹lder people where I liveâ€‹ but not alwaysâ€‹) which keeps them from using technology to solve their own problems.

This, to me, is the real digital divide in 2016. They have to pay someone for help, they don’t have the money, theâ€‹yâ€‹ don’t have options because their communities do not have this level of free tech knowledge available. They are vulnerable to people trying to sell them things. â€‹They are vulnerable to relying on “closed” communities likeâ€‹â€‹ facebook to do everything online. â€‹ Media only heightens this anxietyâ€‹ and makes them feel at risk,â€‹ and phishing and other scams increasingly targeted towards them amplify this issue.

So if you’re going to address the knowledge/empowerment/inclusion gap you often get into less-quantifiable areas. Which means less money for studies and/or fewer vendors willing to foot the bill since the answers are rarely going to be “Just make a new website to help these people!” and more often “ISPs need to create better tools to help people resist threats and make their systems more secure, but not at the expense if alienating people” I look at gmail and some of the basic things they built in (phishing alerts, hiding all the huge cc lines in email, very user-friendly login screens and help files) and then the things they didn’t (large text and or high contrast versions, “low fi” versions for older users with accessibility issues) and I feel like some pushes in the right direction can get better UX layered on top of decently functioning technology and it helps a lot with the empowerment divide we’re seeing.

tl;dr I’d be happy to help with a project like this.

I support Open Library. We don’t offer a lot of support but we do offer some. If you don’t understand a thing, a person will help you with it.

Nowadays most “free” products only offer self-serve help pages or forums if you have a question. I had one today. I made a post on Instagram. Instagram posts automagically to Facebook. I used two hashtags #meta and #1977. The first one auto-linked on fb and the second one did not. I checked the help files and it seems to say that you can use numbers in hashtags. So what was going on? My hypothesis was that numbers were somehow reserved in the internal mechanisms of the thing. So I did a few experiments.

1. Does it even work? The #meta hashtag (which fb auto-linked) generated this URL: https://www.facebook.com/hashtag/meta. You can link it and go read some stuff. If you make a new URL with 1977 you get a decently ugly error page.

2. You can search for either of these tags in the search box and find posts using the string of characters #meta or #1977. Huh.

3. Maybe dates are a special sort of number that’s eliminated? I tried a few more hashtag options: love1 and 1love work. OneEightSeven works but 187 does not. In fact, I could find no combination of only numbers that wouldn’t produce that ugly error message. And, though it took me a while to find a combination of letters that resulted in no hits, I did still get a response when I did that, not a failure.

Conclusion: facebook’s help files are missing the useful piece of information that you actually can’t have a hashtag that is all numbers. This is part 47 of why we will still need librarians or their equivalent in the age of Google. I hope this is helpful for someone. The end.