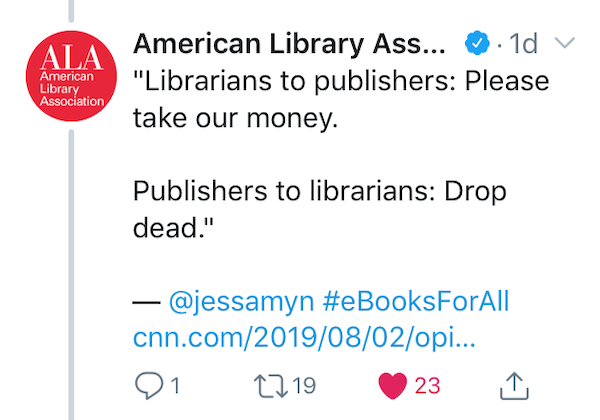 So I wrote an op-ed about the recent Macmillan/ebooks kerfuffle for CNN. Here’s how that all worked…. I got an email from Jane Carr (literary historian, daughter of a librarian, CNN opinion editor) on Monday asking if I’d be interested in writing a thing. I am deep in the throes of Summertime and asked the ever-important question: did it pay? It did (when I wrote a short opinion piece for the NYTimes, it did not) so we went ahead. We talked on the phone for about half an hour while I ranted about ebooks and publishers and copyright. Jane asked some questions about the situation, then we agreed on a timeline (from draft to final in four days so I could have a non-work weekend) and I asked a few questions (links okay? citations needed?) and I got to work.

I had a finished Google Docs draft by the end of Tuesday. Jane looked at it on Wednesday and made a few edits and asked a few questions. Then it got sent to a second editor who asked a few questions and specifically suggested I include more specifics about the Macmillan deal, a detail I presumed librarians knew, but one which really made the article accessible to a larger audience. With these edits done, it went to the managing editor who said “Okay.” It got approved last thing Thursday and went live around lunchtime Friday. They tweeted it and put it on their facebook–which is the only place anyone would leave comments, which was another one of my concerns.

I guess I shouldn’t have been surprised that the response was largely positive, but I always figure when you’re a woman who writes anything on the internet, particularly something that could be seen as “edgy” in some circles, you take your chances. The whole thing involved 30 back-and-forth emails and 30 minutes of phone calls. I was happy with how it all came out.

2 thoughts on “My CNN editorial, how it all came to be”