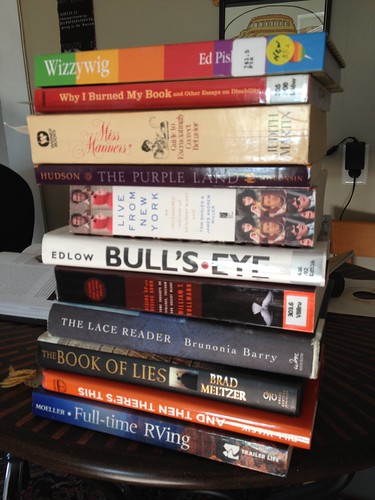 Some of the same patterns as last year. I didn’t travel as much and I think this means I read a bit less. I binge-read the His Dark Materials books and read every book by Brad Meltzer. The Kindle lets me plow through sort of simple fiction and humor stuff, but I’m still not really using it for non-fiction or tougher books. In looking at my to-read pile from February (above), I’m realizing I have a pile of books someplace in my house that has some of these books on it (the Miss Manners book and the RV book in particular) that I must have moved when I spruced up my bedroom. Graphic novels continue to entertain me but it’s getting harder and harder to find new long ones that I like. I still use paperbackswap.com for random serendipity–things come in from my wish list occasionally and I’m never expecting them–and to get rid of older books I just don’t need to have around.

This year I’m going to try to actively read more books by women, more books by authors of color, more non-European authors and more books that fall under the general GLBTQ umbrella. It’s too easy to fall into grabbing the most available titles and these have a tendency to reflect the mainstream. No big deal, and I read some good books, but I’d like to expand my range. It’s good to have goals.