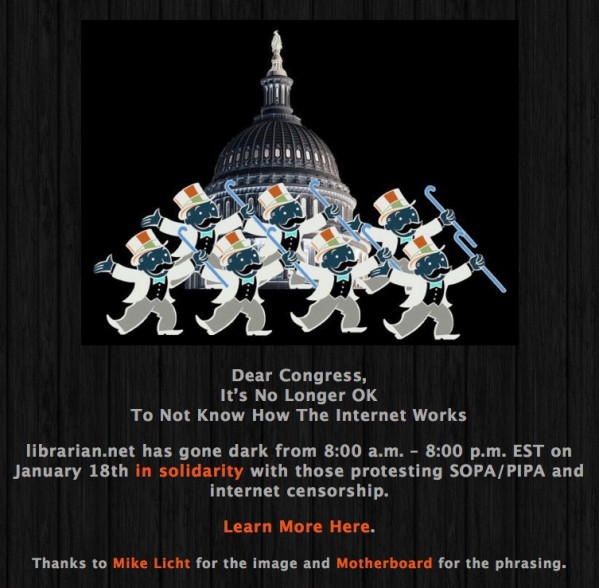 People in Nova Scotia were familiar with the issues I raised about the left-behindness of those still using dial-up. If you were on dial-up five years ago, or even two years ago, you could hope that some websites were still designed for low-bandwidth users. Now with the advent of AJAX as a way to increase responsiveness of websites, there is more code loading each time we visit a “responsive” page. Awesome for me in broadband-land, bad for my patrons up the road in dial-up town. So, what happened? How did we get here? How come we ALL can get dial-up and can’t get broadband?

Well, the reaons vary but they come down to a few key points, one of the major ones being regulations. This editorial from the New York Times — The French Connections (reg. required, sorry) — contains some heavy-handed language, but also some key truths about what is different about getting everyone on dial-up versus getting everyone on broadband.

[W]eâ€™re lagging in new applications of the Internet that depend on high speed. France leads the world in the number of subscribers to Internet TV; the United States isnâ€™t even in the top 10.

What happened to Americaâ€™s Internet lead? Bad policy. Specifically, the United States made the same mistake in Internet policy that California made in energy policy: it forgot â€” or was persuaded by special interests to ignore â€” the reality that sometimes you canâ€™t have effective market competition without effective regulation.

You see, the world may look flat once youâ€™re in cyberspace â€” but to get there you need to go through a narrow passageway, down your phone line or down your TV cable. And if the companies controlling these passageways can behave like the robber barons of yore, levying whatever tolls they like on those who pass by, commerce suffers.

Americaâ€™s Internet flourished in the dial-up era because federal regulators didnâ€™t let that happen â€” they forced local phone companies to act as common carriers, allowing competing service providers to use their lines. Clinton administration officials, including Al Gore and Reed Hundt, the chairman of the Federal Communications Commission, tried to ensure that this open competition would continue â€” but the telecommunications giants sabotaged their efforts, while The Wall Street Journalâ€™s editorial page ridiculed them as people with the minds of French bureaucrats.

I’ve mentioned it before but the ONLY reason that the schools and libraries of Vermont are mostly connected is because Howard Dean (with help from the Dept, of Libraries? I’m unclear on this part) made deals with the telephone companies and cable companies eager to move in to Vermont in a favorable regulatory environment and said “you want access, you wire our schools and libraries.” The question is, how to get this sort of attention for our rural populations now that the easy money and access has been taken? [thanks susan]

State bill HB 2158 did not go to the state Senate. It passed in the House and the Senate did decide to hold a hearing on it. This is the bill to deny state funding to libraries that did not comply with a directive to restrict access to books with sexually explicit passages and homosexual themes to “adults only”. More information about Oklahoma libraries can be found on the librarystories blog and more generally at the Oklahoma Library Association website. Also, check out all these other Oklahoma library blogs (taken from the librarystories’ sidebar).