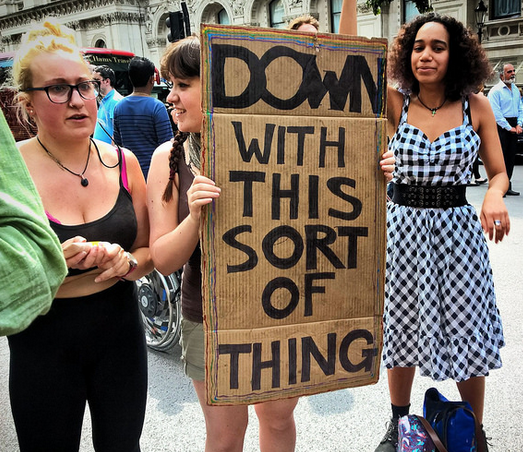 Email from a library worker, paraphrased: I am deeply committed to social justice and anti-oppression principles. I am radical in my politics. I am interested in literacy as a feminist issue. I am also interested in knowledge, access, critical thinking, community impact, etc. I worry there isn’t room to work at the intersections of these interests in library spaces…. Is there room for me in librarianship, and if so, where?

I feel like librarianship is a “big tent” sort of profession, especially public librarianship, so I often feel that there is space for people, but some of it depends not only on politics but on temperament.

Like you, I have what I consider to be radical politics, I am pretty anti-capitalist and have strong feelings that US politics is essentially a con game. I hate this president but did not love the last one, even though I think he made great strides in some social pathways (significantly more acceptance and security for GLBTQ folks, but also still bombing etc, the fuck?). And so part of the issue with librarianship is that there are a LOT of librarians in it who have left-leaning but what I would consider more mainstream liberal politics and who also think of their own political opinions as highly evolved (I don’t think my politics are better than other people’s, but they are mine) and it can sometimes be weird to be around people who are so self-congratulatory about their own awareness without maybe considering some other ways in which liberalism as expressed by libraries is not necessarily liberating.

Anyhow, so part of being able to work in libraries requires tolerance, of co-workers as well as the public who comes from any manner of backgrounds. And then to your question of whether you can find a space for you… it depends. I see a lot of fairly fulfilled public librarians who I think can bring their own politics to the job, particularly if they work in outreach or work with populations who really need the help. I also know librarians who work in deeply radical spaces (Julie Herrada is one, but there are others, often within academic librarianship or the non-profit or activist worlds) and really add a lot to the discourse by being very good at librarianship.

So if you think you can work within a structure that is left-but-not-radical in order to get across your own work which may be radical-and-not-left, I suggest it. I think there are a lot of good ways to participate and really get some good things done. If you feel
like you really need to be immersed 100% among fellow radicals, you are going to have a harder time in librarianship, though I think it can still be done.

As far as school, my general feeling is that the best place you can go to library school is the place you can afford, if there is one. I think some library schools are a bit more activist than others, but overall it’s more about the things you study and the work you do. A few options

– I went to the University of Washington (a long time ago) and was happy with the education I got there. They have TASCHA now which
deals with a lot of inequality issues and the people there are good. Also there is a PhD program so you can possibly get funding
– David Lankes is righteous and he has recently moved to SC’s LIS program (from Syracuse I think?) and he’s worth working with though I
don’t know if I’d move to SC.
– Toni Samek is one of the most radical Canadian LISers that I know, after Normal Horrocks passed a decade ago. She is in Edmonton and it
might be worth dropping her a note.