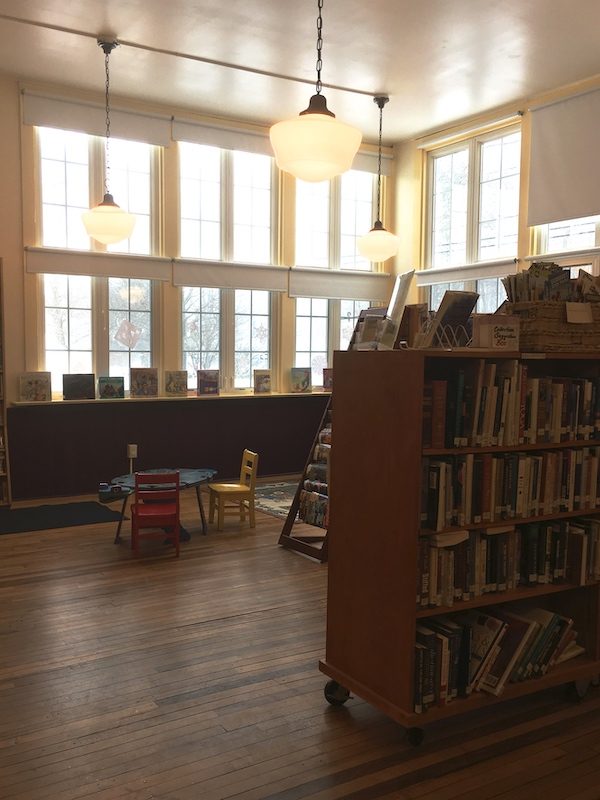 This is a post about rural libraries and money on the occasion of Town Meeting week. Town Meeting happened last week. Most Vermont libraries receive their money through the town and Town Meeting is a time to discuss library funding. I am a sub at the library in my town, enough to go to staff meetings but not enough to work there all the time. I also do drop-in time both at my local library and at one “over the mountain” in the next town. Here are a few anecdotes about how local libraries manage their money situations.

The library in my town (pop 4,778, Orange County) has a budget of about $275K which includes three full-time staff, and one part time staff member. It’s open 36 hours a week. The library received a windfall from a local man who died recently of about 200K. In the pre-Town Meeting coffee hour, people got to talk to the library staff about what they’d like to spend the money on. There are a lot of options. There is a neighboring town that also supports our library with tax dollars. Some years they vote to support the library, other years they don’t. When they vote no, suddenly the people in that town have to pay for a library card. In Vermont there are a lot of different approaches to whether you charge out-of-towners for library cards. Most big libraries do, most small libraries don’t. My town is just barely a big library town.

The over the mountain library is smaller (pop. 1,139, Windsor County). Their service population is about a quarter of my town’s. Library cards there are free. The library runs on a budget of about 45K and is open seventeen hours a week. The library budget got pulled out of the town budget and put on a separate line that needed to be voted on at Town Meeting. This is usually done because someone doesn’t like the library. In this case that someone was a former town clerk who railed against the librarian receiving health insurance for her part time job as well as other expenditures. People in town, people the librarian is certain have never set foot in the library, came to the library’s defense, loudly and vocally. The library got their money. I got a library card (free) when I was there this week.

Down the road is a library that has never had a budget (pop. 546, Rutland County). It’s fully volunteer staffed and is open five hours a week. For the first time, the town voted to give the library 15K so that they could hire someone to actually work in the library. They are hoping for someone with professional experience but it’s pretty tough at that price point. There are no library schools in Vermont but people can take classes with the state library and earn their certification.

I went to a library I had never visited before (no website, pop. 323, Addison County) because I happened to be nearby when it was open. It’s the one in the picture, it lives in an old schoolhouse. It used to be in a tiny box of a building, but they fixed up the other half of the town clerk’s office which is where they are now. There’s a full kitchen which is an amazing feature of such a small library, the second smallest year-round library in the state. It has a budget of 15K and is open 12 hours per week. The town is 82% national forest. The building has an upstairs but they can’t use it because of ADA. There is still a bell in the bell tower and you can ring it if you want. I don’t know what their Town Meeting situation is because I was too busy hearing about the DRAMA in the town clerk appointment.

All of these libraries are in towns that are next to each other. All of them are in different counties. None of them except mine have any full-time staff. All of them are, I think, automated to some degree. All of them are deeply embedded in their communities, which try to support them as best they can. I’ve been trying to visit all of them; I’m a third of the way there.

3 thoughts on “Vermont libraries and their money and towns”