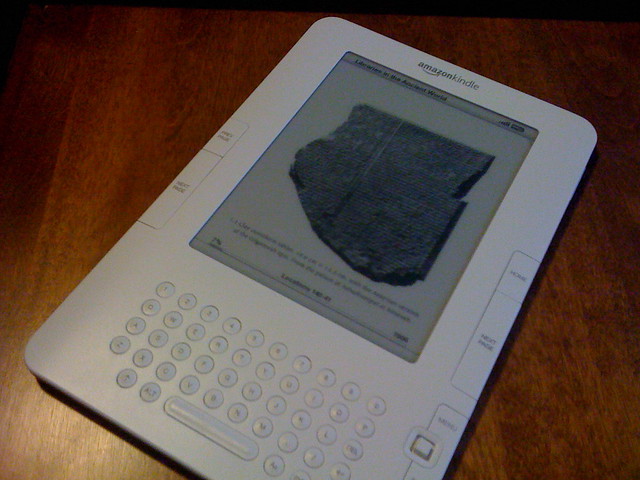 I went to a staff meeting on Friday at the local library where I sometimes work. We did some strategic planning, some walking around the building looking at stuff that could be improved, and some “how to download various digital media format” exercises. We use Overdrive via Listen Up Vermont which gives us access to audiobooks and ebooks in EPUB and Kindle formats. I’m pretty okay at this sort of thing so we clicked around and saw how stuff worked and had a few little glitches but basically stuff was okay. I’ve been following the Amazon book lending story through the blogs the past few weeks and I’ve been skeptical but more curious than anything. I don’t have a Kindle but I’ve seen how popular they are and I was curious how this would all work. Well, as some bloggers have pointed out, it sort of doesn’t. Or, rather, it seems to require compromises to our systems and more importantly to our professional values. I’m hoping these issues can be resolved, but honestly if we can’t lend with some modicum of patron privacy, we shouldn’t be lending.

This is all leading up to an email exchange I had with a reader who was wondering the best way to raise concerns with his librarian about the user experience of borrowing a Kindle book from his library to use with the Kindle app on a non-Kindle device. Apparently, while the process to obtain the book wasn’t too difficult, the process to actually get RID of the book once returned [without a lot of pesky “hey maybe you should BUY this” cajoling] was actually fairly difficult. The default settings are, not surprisingly, strongly urging that the patron purchase (not renewal, not some sort of overdue notification) the book that they have just “returned.” I’ll let the patron speak for himself on this process. His name is Dan Smith and this is reprinted with his express permission.
______

My first experience at “borrowing a Kindle book from the library” has left me with a bad taste in my mouth. It did not feel like borrowing a book from a library. It felt like a salesperson had sold me a book with a “no-risk free home trial” and was pestering me to buy it at the end of the trial period.

I feel that Amazon’s commercial promotion is excessive, and imposes inappropriately on public library patrons. Would you allow distributor’s rep to stand in the hall, grabbing people on their way to the return slot, saying “Stop! Why RETURN it when you can BUY it instantly for just $12.95?”

Yes, some of the irritations can be sidestepped, and as a savvy user I now know how. But Amazon took advantage of my innocence.

FIrst, the book was all marked up! Dotted underlines here and there on almost every page. It was like taking out a library book and finding someone had gone over it with a highlighter! Amazon allow “library” ebooks to be marked and annotated. Instead of cleaning them up for the next patron, it leaves them in place, and encourages you make your own marks for other people to see. I thought this was just some misguided idea about social networking, but it’s more sinister than that.

I turns out that there is a global setting, “Popular Highlights,” which controls whether you see these marks. But it is on by default! I never knew it was there, because it is only activated when a book has lots of them, and this was the first Kindle book I’ve read that had them. The setting to turn them off is buried, and couldn’t find it right away. Blame me for stupidity, but also blame Amazon, because I don’t think most readers want their books scribbled up, and I think Amazon defaults the setting to “on” to serve their own agenda.

Second, at the end of the loan period, instead of politely announcing that the book would be returnedâ€¦ or offering a renewalâ€¦ or possibly even sending overdue fines to the library :) … I was instead confronted by intrusive ads, both in my Kindle application and in my regular email, urging me to buy the book from Amazon.

The email made a point of saying “If you purchase ‘The Bed of Procrustes’ or borrow it again from your local library, all of your notes and highlights will be preserved.” So, that’s why they encourage readers to scribble in library books: they want to hold our marginalia up for ransom.

Third, when the book is returned, it does not simply evaporate. The title, jacket and all, remained visible on my Kindle, exactly as if it were still there, but the behind the book cover is nothing but a notice that it has gone back to the library–and a button I can press. Renewal was not an option. The only option shown is to buy it from Amazon.

It looks like a book, but it’s a wolf in book’s clothing.

Fourth, it was hard to clean that ad out of my Kindle application. I could not find any “delete” option. There is an “archive” option, but all it does is move the book into an “archived items” list, where it continued to sit, looking just like the real books I’ve paid for and might want to re-download. Except that if you click on this one, all you get is a choice of “cancel” or “purchase.” Who would want to save that? But neither I nor an Amazon rep was able to find any deletion option within the Kindle application. The rep claims that the actual Kindle device has this capability, but could not explain why the Kindle application doesn’t. I was able to remove it by using a Web browser, logging into my account on the Amazon website, navigating to a “Manage Your Kindle” page, and deleting it via regular Web access. Fine. Now I know. Twenty minutes of my life wasted finding out.

I’ve now gotten a SECOND email solicitation from Amazon urging me to buy this book. How many I more I will receive?

Amazon gets plenty of promotion just by being the only Kindle book source. Their pushy “Don’t RETURN it, BUY it” attitude is out of bounds.