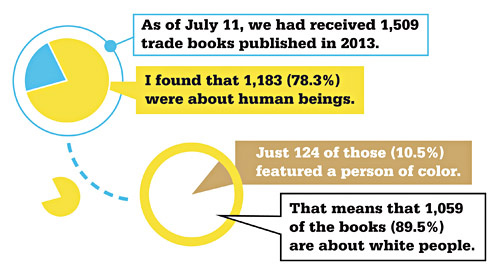 School Library Journal came out with their Diversity Issue a few months ago and it’s been on my “to read” pile since then. Their lead article Childrenâ€™s Books: Still an All-White World? tells a depressing tale of under-representation of black children in US children’s books (they are the only ethnic group mentioned, I am presuming this goes doubly so for groups with smaller representation in the US) and ends with a call to action for librarians to make sure they are creating a market for these titles to encourage more books by and about all kinds of people.

I grew up in a Free to Be You and Me sort of world where my mother actively selected books for me to read with a wide range of ethnicities represented. I had dolls representing many backgrounds. My mother wrote textbooks where there were strict rules about being inclusive and representative and, living in a small town, I assumed this was the way the rest of the world worked. Not so. Reading this article drove home the point that while I may have been a young person during a rare time of expansion of titles and characters of color, that expansion slowed and the situation is still stagnant even as the US is becoming more diverse than ever. Another article in the Diversity Issue highlights research which indicates that “the inclusion of these cross-group images encourages cross-group play“. Sounds like a good thing. We should be doing more.

I read Library Journal pretty regularly. I enjoy it, the writing is often great and John Berry and I see eye to eye on a lot of things. There have been a few lousy headlines about library topics that we’ve seen in the popular media, where the library was on what I would consdier the “right” side of an issue and the headline made them look like they were not. I read the whole article on salaries called What’s an MLIS Worth (for the record, I have an MLib.) and I have to say I could not get over the fact that women in librarianship, in all parts of librarianship earn less than men.

This fact is buried about four pages into the article in a section entitles “Gender Inequity Remains” and states “While women have seen positive improvements in salaries, finally topping $40,000, their salaries continue to lag approximately 6.5% behind salaries for men.” LJ then goes on to explain that they think this is because more men work in academic and vendor-type jobs where salaries are generaly higher. It also states that women have higher starting salaries generally and do better in special libraries where their salaries are 17.6% higher than men, but this section was one of the smaller ones in terms of total population; there were only 14 men’s salaries examined (and 86 women’s). Men in public libraries, on average, earn more than women, except in Canada. Men in academic libraries, on average, earn more than women. I’m sure there are many good reasons why this “effect” exists, but I’m a little curious whether there are really just a few totally plausible explanations for this, or if librarianship despite its intelligent, introspective, feminized nature is just as bad as everyplace else with its remaining gender inequity?